The Big Fix: Seven Practical Steps to Save Our Planet (Hardcover) 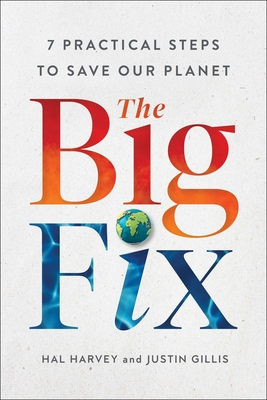 The Big Fix: Seven Practical Steps to Save Our Planet (Hardcover)


Usually Ships in 1-5 Days
An engaging, accessible citizen’s guide to the seven urgent changes that will really make a difference for our climate—and how we can hold our governments accountable for putting these plans into action.

Dozens of kids in Montgomery County, Maryland, agitated until their school board committed to electric school buses. Mothers in Colorado turned up in front of an obscure state panel to fight for clean air. If you think the only thing you can do to combat climate change is to install a smart thermostat or cook plant-based burgers, you’re thinking too small.

That’s where The Big Fix comes in, offering everyday citizens a guide to the seven essential changes our communities must enact to bring our greenhouse gas emissions down to zero—and sharing stories of people who are making those changes reality.

Energy policy advisor Hal Harvey and longtime New York Times reporter Justin Gillis hone in on the seven areas where ambitious but eminently practical changes will have the greatest effect: electricity production, transportation, buildings, industry, urbanization, use of land, and investment in promising new green technologies. In a lively, jargon-free style, the pair illuminate how our political economy really works, revealing who decides everything from what kind of power plants to build to how efficient cars must be before they’re allowed on the road to how much insulation a new house requires—and how we can insert ourselves into all these decisions to ensure that the most climate-conscious choices are being made.

At once pragmatic and inspiring, The Big Fix is an indispensable action plan for citizens looking to drive our country’s greenhouse gas emissions down to zero—and save our climate.
Hal Harvey is the chief executive of Energy Innovation, a nonpartisan climate policy firm delivering research and analysis to help policymakers make informed choices, as well as a senior fellow for energy and the environment at the Paulson Institute, an independent think tank. The recipient of the UN Climate and Clean Air Award, the Heinz Award for the Environment, and the State of California’s Haagen-Smit Clean Air Award, Harvey has been appointed to national and international climate panels by Presidents Bill Clinton and George H.W. Bush. An engineer by training, he received his bachelor’s and master’s degrees from Stanford University.

Justin Gillis is an award-winning journalist with four decades of experience explaining complex issues in simple language for major daily newspapers, including The New York Times, The Washington Post, and The Miami Herald. As the lead reporter on climate science at The Times for nearly a decade, he won the John B. Oakes Award for Distinguished Environmental Journalism for a series of front-page articles exploring the basics of the climate crisis. A graduate of the University of Georgia, he is currently a fellow at the Harvard University Center for the Environment.
“Full of illustrative stories and compelling evidence, The Big Fix outlines an ambitious yet feasible guide for addressing the climate crisis. Business leaders, activists, and policymakers at all levels will find inspiration from the pragmatic approaches outlined in this book.”
—Al Gore, chairman of The Climate Reality Project, chairman of Generation Investment Management, and former vice president of the United States

“Smart, honest, and down-to-earth, The Big Fix addresses the crucial issue of our time: how citizens can compel action on climate change.”
—Elizabeth Kolbert, Pulitzer Prize-winning author of The Sixth Extinction and Under a White Sky

“Nobody grasps climate policy—and what can actually work—better than Hal Harvey. Nobody elucidates climate science better than Justin Gillis. Together, they offer a bold blueprint for saving a habitable Earth.”
—John Doerr, chairman of venture capital film Kleiner Perkins and author of Speed & Scale

“A truly comprehensive—and entirely comprehensible—guide to the things we can and must do to transform our use of energy. This book will be of great use to anyone who wants to participate in the greatest technological revolution in human history.”
—Bill McKibben, a founder of grassroots climate-campaign group 350.org and author of The Flag, the Cross, and the Station Wagon

“[Harvey and] Gillis make fighting climate change feel a bit less intimidating in this down-to-earth look at ways the average citizen can make a difference… a useful guide for budding activists.”
—Publishers Weekly