War on the Border: Villa, Pershing, the Texas Rangers, and an American Invasion (Hardcover) 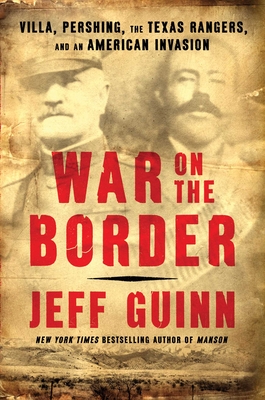 War on the Border: Villa, Pershing, the Texas Rangers, and an American Invasion (Hardcover)


Usually Ships in 1-5 Days
An “engagingly written” (The Wall Street Journal) account of the “Punitive Expedition” of 1916 that brought Pancho Villa and Gen. John J. Pershing into conflict, and whose reverberations continue in the Southwestern US to this day.

Jeff Guinn, chronicler of the Southwestern US and of American undesirables (Bonnie and Clyde, Charles Manson, and Jim Jones) tells the “riveting and supremely entertaining narrative” (S.C. Gwynne, New York Times bestselling author of Empire of the Summer Moon) of Pancho Villa’s bloody raid on a small US border town that sparked a violent conflict with the US. The “Punitive Expedition” was launched in retaliation under Pershing’s command and brought together the Army, National Guard, and the Texas Rangers—who were little more than organized vigilantes with a profound dislike of Mexicans on both sides of the border. Opposing this motley military brigade was Villa, a guerrilla fighter who commanded an ever-changing force of conscripts in northern Mexico.

The American expedition was the last action by the legendary African American “Buffalo Soldiers.” It was also the first time the Army used automobiles and trucks, which were of limited value in Mexico, a country with no paved roads or gas stations. Curtiss Jenny airplanes did reconnaissance, another first. One era of warfare was coming to a close as another was beginning. But despite some bloody encounters, the Punitive Expedition eventually withdrew without capturing Villa.

Today Anglos and Latinos in Columbus, New Mexico, where Villa’s raid took place, commemorate those events, but with differing emotions. And although the bloodshed has ended, the US-Mexico border remains as vexed and volatile an issue as ever.
Jeff Guinn is the bestselling author of numerous books, including Go Down Together, The Last Gunfight, Manson, The Road to Jonestown, War on the Border, and Waco. He lives in Fort Worth, Texas, and is a member of the Texas Literary Hall of Fame.
"The Mexican borderlands in the early 20th century are a history buff’s dream: violent, romantic, epic in scale, a little bit crazy, and featuring an astounding cast of larger-than-life historical characters. Out of this striking raw material Jeff Guinn has fashioned a riveting and supremely entertaining narrative. I highly recommend it.”
— S. C. Gwynne, author of New York Times bestsellers Empire of the Summer Moon and Rebel Yell

"Engagingly written. . . . Mr. Guinn’s deft writing makes War on the Border an enjoyable primer on Mexican-American relations in the latter years of the 19th-century and during the Mexican Revolution, as well as an adequate introduction to Mexican political intrigues of the time."
— Peter Cozzens

"A tightly focused history of the relations between the U.S. and Mexico in the early 20th century . . . A riveting account of a dynamic period featuring larger-than-life characters and plenty of drama and suspense."
— Kirkus Reviews (starred review)

"A lively, intricate narrative of America’s early-twentieth-century conflicts with Mexico, including the nearly year-long Punitive Expedition. . . . A rich examination of a thorny clash within the Mexican government and a quietly damning indictment of American foreign policy at a time when the U.S. expected Mexico to capitulate to every demand."
— Chris Vognar

"General 'Black Jack' Pershing’s 1916 pursuit of Pancho Villa into Mexico has, unfortunately, long occupied a dusty and overlooked corner of history. Let us now give thanks that Jeff Guinn has written a stirring book that promises to be the classic treatment of this hair-raising time and place. This is a terrific tale of valorous advances and feckless blunders, of brilliant commanders and greedy knaves, and every page crackles with high adventure."
— Doug J. Swanson, author of Cult of Glory: The Bold and Brutal History of the Texas Rangers

"Jeff Guinn has focused on a memorable period of border history -- the decade (1910-1920) of the Mexican Revolution. A gifted writer, Guinn is able to explain a complex situation peopled with larger-than-life figures."
— Charles H. Harris III, coauthor of The Texas Rangers in Transition: From Gunfighters to Criminal Investigators, 1921–1935

"Guinn brings the U.S.-Mexico conflicts of the early 20th century to vibrant life in this superior history. . . . A riveting introduction to a lesser-known chapter in American history."
— Publishers Weekly (starred review)

"Guinn gives us a riveting account of one of the most dynamic periods in U.S.-Mexican relations. His captivating narrative is a result of his strong source materials and nuanced storytelling. This is a great read for both the academic and non-academic audiences alike."


— Miguel A. Levario, author of Militarizing the Border: When Mexicans Became the Enemy

"Engagingly written. . . . Mr. Guinn’s deft writing makes War on the Border an enjoyable primer on Mexican-American relations in the latter years of the 19th-century and during the Mexican Revolution, as well as an adequate introduction to Mexican political intrigues of the time."
— Peter Cozzens