Fen, Bog and Swamp: A Short History of Peatland Destruction and Its Role in the Climate Crisis (Hardcover) 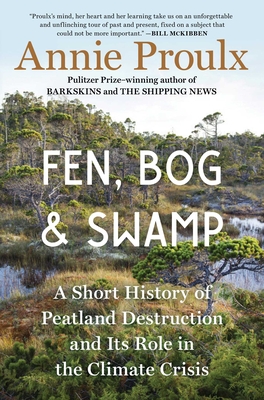 Fen, Bog and Swamp: A Short History of Peatland Destruction and Its Role in the Climate Crisis (Hardcover)


Usually Ships in 1-5 Days
From Pulitzer Prize winner Annie Proulx—whose novels are infused with her knowledge and deep concern for the earth—comes a riveting, revelatory history of our wetlands, their ecological role, and what their systematic destruction means for the planet.

A lifelong environmentalist, Annie Proulx brings her wide-ranging research and scholarship to the subject of wetlands and the vitally important yet little understood role they play in preserving the environment—by storing the carbon emissions that greatly contribute to climate change. Fens, bogs, swamps, and marine estuaries are the earth’s most desirable and dependable resources, and in four stunning parts, Proulx documents the long-misunderstood role of these wetlands in saving the planet.

Taking us on a fascinating journey through history, Proulx shows us the fens of 16th-century England to Canada’s Hudson Bay lowlands, Russia’s Great Vasyugan Mire, America’s Okeefenokee National Wildlife Refuge, and the 19th-century explorers who began the destruction of the Amazon rainforest. Along the way, she writes of the diseases spawned in the wetlands—the Ague, malaria, Marsh Fever—and the surprisingly significant role of peat in industrialization.

A sobering look at the degradation of wetlands over centuries and the serious ecological consequences, this is a stunningly important work and a rousing call to action by a writer whose passionate devotion to understanding and preserving the environment is on full and glorious display.
Annie Proulx is the author of nine books, including the novels The Shipping News and Barkskins, and the story collection Close Range. Her many honors include a Pulitzer Prize, a National Book Award, the Irish Times International Fiction Prize, and a PEN/Faulkner award. Her story “Brokeback Mountain,” which originally appeared in The New Yorker, was made into an Academy Award–winning film. Fen, Bog, and Swamp is her second work of nonfiction. She lives in New Hampshire.
Praise for Fen, Bog & Swamp

“This haunting tribute to the world’s peatlands is also a deeply researched lament for the draining and destruction of critical habitats that store twice as much carbon as all the world’s forests… Proulx’s poetic description of these places, and peat itself, is a pleasure to read.”
—Financial Times

“The Pulitzer Prize-winning author of Brokeback Mountain and The Shipping News has written a book—really a lengthy, beautifully executed essay—on climate change… In searing prose that merges history and science, Proulx wields her pen like a knife to slowly carve out what’s already lost.”
—Bloomberg

“In a way, Proulx points out, the fight to preserve wetlands is a metaphor for the global task of slowing climate change—a failure to see how small acts of destruction add up to something much larger, and a scramble to save ecosystems only when the harms to ourselves become undeniable.”
—Wired

“The Pulitzer Prize-winning Proulx ("The Shipping News," "Barkskins") turns to nonfiction, writing about climate change, the history of wetlands, and what their destruction means for the planet.”
—Minneapolis Star-Tribune

“In accessible language, the acclaimed author of Barkskins and “Brokeback Mountain” turns her perceptive eye to the destruction of the world’s peatlands in Fen, Bog & Swamp, a short, informative history that argues for their preservation and restoration.”
—BookPage, *starred review*

“In beautiful, magnificent prose, the Pulitzer-winning novelist offers a powerful indictment of human complicity in environmental destruction. Proulx wants us to see the loss of wetlands and to appreciate the beauty in these swampy and often stinking places. Boy, does she succeed.”
—The Guardian

"Proulx eloquently underscores the dangers for the planet, as wetlands sequester carbon emissions. The book is a stark but beautifully written 'Silent Spring'-style warning from one of our greatest novelists.”
—Christian Science Monitor

“Proulx’s astute and impassioned examinations of all kinds of wetlands, including estuaries, show a new side of the novelist we thought we knew.”
—Bethanne Patrick, Los Angeles Times

"An enchanting history of our wetlands... Imbued with the same reverence for nature as Proulx’s fiction, Fen, Bog, and Swamp is both an enchanting work of nature writing and a rousing call to action."
—Esquire

“National Book Award– and Pulitzer Prize–winning Proulx’s attunement to the intricacies and vulnerabilities of nature and humankind’s reckless exploitation of the living world shapes her celebrated fiction… Writing with her signature vitality, precision, and creativity, she crafts a galvanizing narrative out of a cavalcade of facts… Proulx’s concern for the future of life on earth as the planet warms is acute, while her inquiry into the watery places where peat is found balances alarm and despair with wonder and affirmation of nature’s ability to rebound.”
—Booklist

“With this collection of short essays about peatlands, [Proulx’s] eye for folly is sharply trained on the long record of ruinous drainage ‘projects.’ But while there are many occasions for eco-grief in the book, there are also glimmers of hope. Fans of Proulx’s fiction, even those with marginal interest in peatlands, will be intrigued by the snippets of memoir and the habits of a writer’s mind that this collection reveals.”
—Library Journal

"Pulitzer winner Proulx (Barkskins) sounds the alarm on the role of Earth’s wetlands in the climate crisis in this stunning account. This resonant ode to a planet in peril is tough to forget."
—Publishers Weekly, starred review

“Remaking the world inevitably impoverishes it and us, as Proulx writes in a crescendo… She provides a particularly good compact history of the draining of the fens of eastern England in an act pitting capitalists against working people… An eloquent, engaged argument for the preservation of a small and damp yet essential part of the planet."
—Kirkus

"So often feared, dredged, and drained, swamps, bogs, and fens (it turns out) are just as vital to our species’ survival on this planet as healthy forests and oceans—perhaps moreso. Proulx has written a moving elegy and cri de coeur for our world's wetlands. I learned something new—and found something amazing—on every page."
—Anthony Doerr, author of All the Light We Cannot See and Cloud Cuckoo Land

"Talk about seeing the whole world through a single well-chosen window! Annie Proulx is, as ever, remarkable—her mind, her heart, and her learning take us on an unforgettable and unflinching tour of past and present, fixed on a subject that could not be more important. A compact classic!"
—Bill McKibben, author The Flag, the Cross, and the Station Wagon: A Graying American Looks Back on his Suburban Boyhood and Wonders What the Hell Happened

"Annie Proulx has brought nature full circle in her short history, Fen, Bog, and Swamp. They all store carbon with a watertight seal of the vault. What was once literature and lighting, food and fodder, mood and medicine to the peoples of the past has nearly gone. The carbon graves will open. We must understand and restore these vital ecosystems to protect our future."
—Diana Beresford-Kroeger, author of To Speak for the Trees

“In turn exhilarating, poetic and terrifying, Fen, Bog & Swamp opened my eyes to the crucial role that watery landscapes should play in our environmental survival. Proulx juggles fascinating characters, extraordinary histories and serious science with the erudition and literary grace for which she is justifiably famous. She makes a truly elegant and compelling contribution to the debates about climate justice issues that confront us all."
—Charlotte Gray, author of The Promise of Canada