Chasing the Boogeyman: A Novel (Paperback) 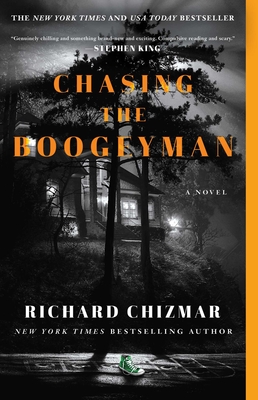 Chasing the Boogeyman: A Novel (Paperback)


Usually Ships in 1-5 Days
The acclaimed New York Times and USA TODAY bestselling novel of small-town evil that “is genuinely chilling and something brand-new and exciting” (Stephen King) and “unforgettable” (Harlan Coben).

In the summer of 1988, the mutilated bodies of several missing girls begin to turn up in a small Maryland town. The grisly evidence leads police to the terrifying assumption that a serial killer is on the loose in the quiet suburb. But soon a rumor begins to spread that the evil stalking local teens is not entirely human. Law enforcement, as well as members of the FBI, are certain that the killer is a living, breathing madman—and he’s playing games with them. For a once peaceful community trapped in the depths of paranoia and suspicion, it feels like a nightmare that will never end.

Recent college graduate Richard Chizmar returns to his hometown just as a curfew is enacted and a neighborhood watch is formed. Amid preparing for his wedding and embarking on a writing career, he soon finds himself thrust into a real-life horror story. Inspired by the terrifying events, Richard writes a personal account of the serial killer’s reign of terror, unaware that these events will continue to haunt him for years to come.

A clever, terrifying, and heartrending work of metafiction, Chasing the Boogeyman is the ultimate marriage between horror fiction and true crime. Chizmar’s “dazzling work of fresh imagination and psychological insight” (Caroline Kepnes, New York Times bestselling author of You) is on full display in this truly unique novel that will haunt you long after you turn the final page.
Richard Chizmar is the coauthor (with Stephen King) of the New York Times bestselling novella, Gwendy’s Button Box and Gwendy’s Final Task. Recent books include The Girl on the Porch; The Long Way Home, his fourth short story collection; and Widow’s Point, a chilling tale about a haunted lighthouse written with his son, Billy Chizmar, which was recently made into a feature film. His short fiction has appeared in dozens of publications, including Ellery Queen’s Mystery Magazine and The Year’s 25 Finest Crime and Mystery Stories. He has won two World Fantasy awards, four International Horror Guild awards, and the HWA’s Board of Trustee’s award. Chizmar’s work has been translated into more than fifteen languages throughout the world, and he has appeared at numerous conferences as a writing instructor, guest speaker, panelist, and guest of honor. He is the author of Chasing the Boogeyman. Follow him on Twitter @RichardChizmar or visit his website at: RichardChizmar.com.
“Chasing the Boogeyman is genuinely chilling and something brand new and exciting. Compulsive reading and scary…I thought often of I’ll Be Gone in the Dark, but never to the story’s detriment. Ray Bradbury’s influence is all over it, but he never could’ve written that ending. Chasing the Boogeyman does what true crime so often cannot: it offers both chills and a satisfying conclusion.” —Stephen King

“Hammer in hand, Richard Chizmar’s come to shatter the idea that everything’s already been done. An absolutely chilling mash-up of styles, media, biography, and legend. Elastic, unsettling, brilliant. And here you thought you knew the names of every genre.” —Josh Malerman, New York Times bestselling author of Bird Box and Malorie

“Brilliant…absolutely fascinating, totally compelling and immensely poignant. I dare you not to finish it in one sitting. This one will stay with me!” —C. J. Tudor, bestselling author of The Burning Girls and The Other People

“Riveting. Chilling. Chasing the Boogeyman is an unflinching look at a real-life monster and the ordinary heroes obsessed with stopping him.” —Riley Sager, New York Times bestselling author of Final Girls and Home Before Dark

“Literature was invented around 3400 B.C. Approximately 5,419 years later, Richard Chizmar has invented an entirely new genre of literature with Chasing the Boogeyman. Compulsive, encompassing storytelling. Do not miss this one!” —Brian Keene, bestselling author of The Rising

“With Chasing the Boogeyman, Richard Chizmar demonstrates the full power of his impressive storytelling reach. A fascinating conceit paired with deeply human writing creates a thriller that conjures writers as disparate as Stephen King and Michelle McNamara. The result is a marvelous mind game of nuanced, layered storytelling.” —Michael Koryta, New York Times bestselling author of Never Far Away

“Richard Chizmar, with Chasing the Boogeyman, presents himself as a print version of Norman Rockwell, if the artist had devoted himself to the creepy things that hide under the bed.” —Linwood Barclay, New York Times bestselling author of Find You First

“If Ray Bradbury had written In Cold Blood it would probably look a lot like Richard Chizmar’s masterful Chasing the Boogeyman, a perfectly written and unnervingly suspenseful thriller about a series of murders that tear apart the fabric of a picturesque Maryland town and the writer who puts everything on the line to solve them. This is a mind-bendingly engaging book. Be prepared for the hairs on the back of your neck to be standing at attention as you devour every rich page.” —David Bell, bestselling author of The Request

“Chasing the Boogeyman pulled me down deep then buried me alive. Combining gritty true crime with the darkly imagined, Chizmar offers something unique—and uniquely frightening.” —Andrew Pyper, bestselling author of The Residence

“Absolutely riveting… Richard Chizmar’s keen ability to tell the small-town-tale, investigative insight, and captivating eye for detail, come together in this perfect storm of true crime horror.” —J.D. Barker, international bestselling author of She Has A Broken Thing Where Her Heart Should Be

“Richard Chizmar spins dark magic with Chasing the Boogeyman. A true crime masterpiece with Chizmar himself as a key player in the grisly mystery. Highly recommended, but not for the faint of heart.” —Jonathan Mayberry, New York Times bestselling author of V-Wars and Patient Zero

“Chasing the Boogeyman perfectly captures the feeling of growing up in a small town facing an existential threat from real evil. Chizmar’s Edgewood is post-Bradbury-esque, not as idyllic as that author’s Green Town...it’s grittier and more grounded in a reality contemporary readers will recognize and respond to. Richard Chizmar has invented a new literary genre—brilliant!” —Bev Vincent, co-editor with Stephen King of Flight or Fright

“Chizmar’s Chasing the Boogeyman has been written upon missing person flyers and published on telephone poles. HAVE YOU READ THIS STORY? For your own safety, you should… The Boogeyman will soon enter the pantheon of suburban legends that fill our backyards like summer fireflies, his name whispered into ears all over. Pray you keep yours.” —Clay McLeod Chapman, bestselling author of The Remaking

“Chasing the Boogeyman is a dazzling work of fresh imagination and psychological insight...a rare read that brings that beyond words feeling of having slipped away into another world. The story has the most riveting unique pulse as if there is a real heart beating in there. I am in awe!” —Caroline Kepnes, New York Times bestselling author of You

“Wonderful…a knotty mystery with an elegant resolution at its heart....It feels so original, dizzy-making in its expert layering of fact and fiction....A hymn to both innocence and to growing up.” —Catriona Ward, bestselling author of The Last House on Needless Street

“A devastating, moving, and devilishly ingenious tale of murder lore, and an entire town’s loss of innocence….Brilliant and haunting.” —Eric Rickstad, New York Times bestselling author of The Silent Girls

“Perfect for fans of true crime, meticulously orchestrated, and clever beyond measure, Chasing the Boogeyman will leave you guessing long after you've read the last page.” —Alma Katsu, acclaimed author of The Hunger and Red Widow

"We're all chasing the boogeyman, aren't we? The boogeyman's the past, the truth, our fragile memories that knit the two together. What Richard Chizmar's done for us in Chasing the Boogeyman is give that narrative a taut dramatic line he balances on, never quite tipping one way or the other, just stepping sure-footed all the way to the end—showing us that this is a walk we can all take, if we have the nerve." —Stephen Graham Jones, New York Times bestselling author of The Only Good Indians

“Chizmar takes creepy to a whole new level….A solid true crime facsimile, mixing background detail with action, suspense, and a compelling pace. As metafiction, the book excels: the proximity to reality adds an unshakable level of unease, and it is injected with just the right amount of self-reflection to forge an ironically honest, emotional connection with the reader. The result is strikingly original, a story that will thrill fans of intimately investigated nonfiction like Michelle McNamara's I’ll Be Gone in the Dark and self-aware, psychological suspense like Oyinkan Braithwaite's My Sister, the Serial Killer.” —Booklist

"This brilliant work of metafiction crafts a not-so-true crime story that feels ripe for a Netflix series….Chizmar’s novel isn’t just a clever riff on genre; it’s a meditation on the dangers and darkness of home, on what happens when the place where we grew up finally grows up itself—or at least when it discovers the violence it’s capable of….A meticulously remembered, beautifully crafted hometown nightmare that reminds readers that nostalgia cuts both ways; sure, it can keep our past alive, but it can also be the shadow man standing at the foot of your bed….For true crime and horror fans, this one’s essential.” —Library Journal (starred review)