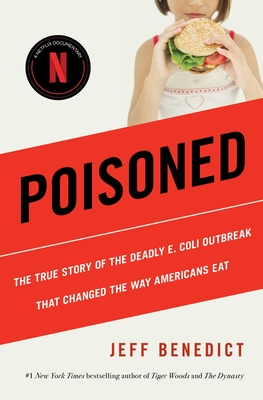 From Jeff Benedict, the #1 New York Times bestselling author of Tiger Woods and The Dynasty, Poisoned chronicles the events surrounding the worst food-poisoning epidemic in US history: the deadly Jack in the Box E. coli infections in 1993.

On December 24, 1992, six-year-old Lauren Rudolph was hospitalized with excruciating stomach pain. Less than a week later she was dead. Doctors were baffled: How could a healthy child become so sick so quickly? After a frenzied investigation, public-health officials announced that the cause was E. coli O157:H7, and the source was hamburger meat served at a Jack in the Box restaurant. During this unprecedented crisis, four children died and over seven hundred others became gravely ill.

In Poisoned, award-winning investigative journalist and #1 New York Times bestselling author Jeff Benedict delivers a jarringly candid narrative of the fast-moving disaster, drawing on access to confidential documents and exclusive interviews with the real-life characters at the center of the drama—the families whose children were infected, the Jack in the Box executives forced to answer for the tragedy, the physicians and scientists who identified E. coli as the culprit, and the legal teams on both sides of the historic lawsuits that ensued. Fast Food Nation meets A Civil Action in this riveting account of how we learned the hard way to truly watch what we eat.
Jeff Benedict is the bestselling author of seventeen nonfiction books. He’s also a film and television producer. He is the coauthor of the #1 New York Times bestseller Tiger Woods. The book was the basis of the Emmy-nominated HBO documentary Tiger, which Benedict executive produced. The Dynasty, the definitive inside story of the New England Patriots under Robert Kraft, Bill Belichick, and Tom Brady, was a New York Times bestseller. The book is the basis of a forthcoming ten-part documentary series for Apple TV+, which Benedict is executive producing. His critically acclaimed book Poisoned is the basis of a Netflix documentary, which Benedict executive produced. His legal thriller Little Pink House was adapted into a motion picture starring Catherine Keener and Jeanne Tripplehorn. Benedict wrote Steve Young’s New York Times bestselling autobiography QB, which was the basis of an NFL Films documentary. Benedict’s upcoming biography of LeBron James will be published in 2023.
“Completely gripping . . . Your perfect beach book has arrived. With Poisoned, Jeff Benedict manages to deliver the full literary experience of a medico-legal thriller in a work of nonfiction.”
—New York Times

“Benedict is a masterly reporter and can create characters and spin plot as crisply as any novelist, making the science behind his gritty message easy to absorb. The value of Poisoned is that it brings to life the stories behind the headlines in a way no other food safety book has done.”
—The Atlantic

“A chilling, page-turning lesson in food safety. . . . Benedict fashions the book like a police procedural, keeping the beat with quick cuts to the major players—parents waiting by their dying children's bedsides, lawyers and corporate executives. With accounts of his firsthand interviews and observation, Benedict provides a powerful reminder that food safety is a matter of life and death.”
—Kirkus Reviews

“[In 1993] an e. coli outbreak at Jack in the Box restaurants killed four children and sickened hundreds more. Jeff Benedict does an impressive job in Poisoned of bringing those statistics to life. . . . Benedict does a dramatic public service by showing us what happened behind the scenes.”
—Christian Science Monitor

PRAISE FOR OTHER BOOKS BY JEFF BENEDICT

“An epic business story . . . The Dynasty goes deeper than anyone has before on the Beatles-esque collaboration among an owner, a coach, and a star player.”
—Bloomberg

“Most often in our business, there are writers and there are reporters, and rarely do the twain meet. In The Dynasty, Jeff Benedict shows he’s masterful at both. His reporting on the very well-worn (trust me) earth of the Patriots’ greatness is groundbreaking, starting with his illumination of the evening in the hospital in 2001 when Drew Bledsoe’s life was in peril and going all the way through to previously unknown details of the emotional play-by-play of Tom Brady’s departure from New England. The imagery and prose are just as strong. Such a great read from Benedict.”
—Peter King, NBC Sports, author of “Football Morning in America”

“For two decades we’ve been peering up at the castle looming over the American sportscape with the same mixture of awe, suspicion, and envy with which peasants have peered up at palisades for millennia. So when a deft and lyrical serf named Benedict slips inside, lowers the drawbridge, and waves us in to see the ramparts, towers, turrets, and castle keep where the Brady-Belichick-Kraft trinity ruled . . . how can a peasant resist?”
—Gary Smith, longtime Sports Illustrated writer and author of Beyond the Game

“This is an extraordinary book. The narrative is comprehensive, intimate, and original. I’ve watched and written about the entire Patriots dynasty, and yet this epic story provides new insights and startling details that I didn’t know. I can assure you that there’s not another Patriots book like it.”
—Michael Holley, author of Belichick and Brady and Patriot Reign

“A marvelously told story of the New England Patriots . . . This is the story of a well-run and successful business, very much like Apple or Amazon. . . . You don’t need be a sports fan to enjoy this masterpiece study of a successful sports franchise. . . . With substantial research, great attention to detail and superb writing, The Dynasty is a book worthy of the team it chronicles.”
—Book Reporter

“A page-turner for Patriots fans. There are plenty of behind-the-scenes, untold nuggets, along with more detailed versions of often-told stories that have taken place during Robert Kraft’s ownership of the team. . . . It was as if Benedict was a fly on the wall for many of these significant events, and in some cases, he was in fact present to witness some indelible moments.”
—Boston Herald

“Irresistible . . . Immensely readable . . . The authors have laid out a saga that is part myth, part Shakespeare, part Jackie Collins. . . . Benedict and Keteyian bring us along for the ride in a whirlwind of a biography that reads honest and true.”
—Leigh Montville, The Wall Street Journal

“There is beauty and awe in this perfectly pitched biography . . . It has torque and velocity . . . It’s a confident and substantial book that’s nearly as sleek as a Christopher Nolan movie. It makes a sweet sound, like a well-struck golf ball. I found it exhilarating, depressing, tawdry and moving in almost equal measure. It’s a big American story. . . . The authors bring grainy new detail to almost every aspect of Woods’s life.”
—Dwight Garner, The New York Times

“An ambitious 360-degree portrait of golf’s most scrutinized figure . . . The book features fresh reporting on almost every significant element of Woods’ story. . . . It is a book brimming with revealing details.”
—Sam Weinman, Golf Digest

“Chilling . . . Exhaustively researched . . . The authors present Woods as a man ‘both blessed and cursed’ by his otherworldly ability to separate his off-the-course problems from his performance on it. Tiger Woods is a fascinating analysis of the former, but for golf fans—and probably for Woods himself—his worth will still be judged by the latter. . . . What Benedict and Keteyian do better than in any biography I’ve read about Woods is detail the human costs of this machine-like focus.”
—John Paul Newport, Bloomberg Businessweek