The Reckoning: A Novel (Paperback) 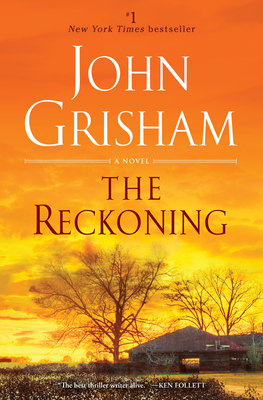 The Reckoning: A Novel (Paperback)

“John Grisham returns to Ford County and goes back in time in The Reckoning. The Banning family has been farming there for over a hundred years when its patriarch is called for duty in World War II. He returns a heavily decorated hero to his beloved community, his lovely wife, and his two children. Then, for no apparent reason, or none he shall ever reveal, he goes to town one day to murder the Methodist minister. With masterful storytelling, Grisham takes us through the war Pete Banning fought, a grueling trial, and deep into the human heart and psyche. Grishamis at his best in The Reckoning.”
— Richard Howorth, Square Books, Oxford, MS

Pete Banning was Clanton, Mississippi’s favorite son—a decorated World War II hero, the patriarch of a prominent family, a farmer, father, neighbor, and a faithful member of the Methodist church. Then one cool October morning he rose early, drove into town, and committed a shocking crime.  Pete's only statement about it—to the sheriff, to his lawyers, to the judge, to the jury, and to his family—was: "I have nothing to say." He was not afraid of death and was willing to take his motive to the grave.

In a major novel unlike anything he has written before, John Grisham takes us on an incredible journey, from the Jim Crow South to the jungles of the Philippines during World War II; from an insane asylum filled with secrets to the Clanton courtroom where Pete’s defense attorney tries desperately to save him.

Reminiscent of the finest tradition of Southern Gothic storytelling, The Reckoning would not be complete without Grisham’s signature layers of legal suspense, and he delivers on every page.
John Grisham is the author of forty-seven consecutive #1 bestsellers, which have been translated into nearly fifty languages. His recent books include The Judge's List, Sooley, and his third Jake Brigance novel, A Time for Mercy, which is being developed by HBO as a limited series.

John lives on a farm in central Virginia.
“The quest for justice is only the beginning in this Southern-family saga…Grisham does so much more this time around.”
—Associated Press

“John Grisham is not only the master of suspense but also an acute observer of the human condition. And these remarkable skills converge in The Reckoning—an original, gripping, penetrating novel that may be his greatest work yet.”
—David Grann, New York Times bestselling author of Killers of the Flower Moon

“John Grisham is the master of legal fiction, and his latest starts with a literal bang — and then travels backward through the horrors of war to explore what makes a hero, what makes a villain, and how thin the line between the two might be.”
—Jodi Picoult, #1 New York Times bestselling author of A Spark of Light and Small Great Things

“In this saga of love and war, John Grisham has given us a sprawling and engrossing story about a southern family, a global conflict, and the kinds of secrets that can shape all of us.  From the courtrooms and jails of rural Mississippi to the war-torn Pacific, Grisham spins a tale that is at once entertaining and illuminating.”
—Jon Meacham, New York Times bestselling author of The Soul of America

“When a master of storytelling and suspense takes on one of the most wrenching stories in history, the result is a book that will break your heart, set your blood pumping and your mind racing, and leave you gasping for breath by the final page. I’m still trying to recover from The Reckoning.”
–Candice Millard, New York Times bestselling author of The River of Doubt and Destiny of the Republic