Havana Syndrome: Mass Psychogenic Illness and the Real Story Behind the Embassy Mystery and Hysteria (Paperback) 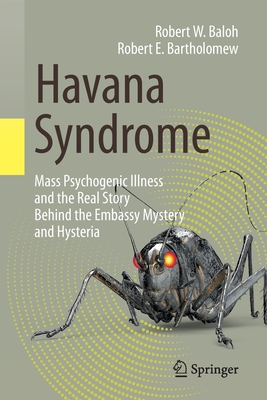 Havana Syndrome: Mass Psychogenic Illness and the Real Story Behind the Embassy Mystery and Hysteria (Paperback)

It is one of the most extraordinary cases in the history of science: the mating calls of insects were mistaken for a "sonic weapon" that led to a major diplomatic row. Since August 2017, the world media has been absorbed in the "attack" on diplomats from the American and Canadian Embassies in Cuba. While physicians treating victims have described it as a novel and perplexing condition that involves an array of complaints including brain damage, the authors present compelling evidence that mass psychogenic illness was the cause of "Havana Syndrome."

This mysterious condition that has baffled experts is explored across 11-chapters which offer insights by a prominent neurologist and an expert on psychogenic illness. A lively and enthralling read, the authors explore the history of similar scares from the 18th century belief that sounds from certain musical instruments were harmful to human health, to 19th century cases of "telephone shock," and more contemporary panics involving people living near wind turbines that have been tied to a variety of health complaints. The authors provide dozens of examples of kindred episodes of mass hysteria throughout history, in addition to psychosomatic conditions and even the role of insects in triggering outbreaks.

Havana Syndrome: Mass Psychogenic Illness and the Real Story Behind the Embassy Mystery and Hysteria is a scientific detective story and a case study in the social construction of mass psychogenic illness.

Robert W. Baloh, MD is a distinguished professor of Neurology and Head and Neck Surgery at the David Geffen School of Medicine, UCLA. Author of 11 books and over 300 articles in peer-reviewed science journals, he is a pioneer in the study of the vestibular system: the part of the inner ear which helps people to maintain their sense of balance and spatial awareness. He has developed tests of vestibular function that are used by inner ear specialists around the world. Robert E. Bartholomew, PhD is an Honorary Senior Lecturer in the Department of Psychological Medicine at the University of Auckland. He completed a doctorate in Medical Sociology from James Cook University in Australia and his Master's in Sociology from the State University of New York at Albany. He has published in over 60 peer-reviewed journals, has been featured in a National Geographic series on modern myths and has appeared on The History and Discovery Channels. A Fellow with the Center for Inquiry in Amherst, New York, he teaches History at Botany College in Auckland.