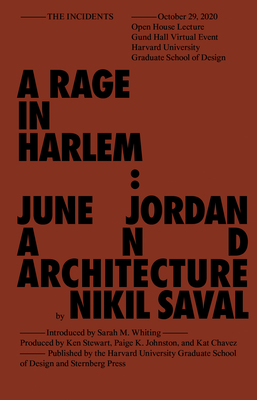 
Coming Soon - Available for Pre-Order Now
Pennsylvania State Senator Nikil Saval tells the story of an unlikely partnership between June Jordan and R. Buckminster Fuller, and their attempt to reimagine Harlem in the wake of the 1964 riots.

In the tense days leading up to the 2020 American elections, then-candidate for Pennsylvania State Senate Nikil Saval addressed a virtual audience at the Harvard GSD to tell a story about Black feminist writer June Jordan and a little-known project that resulted from the aftermath of the 1964 Harlem riot. The events of police brutality and community grieving made a lasting impression on Jordan, who, while known for her work as a poet, playwright, and activist, responded with a proposal for a multiple-tower housing design. Through an unlikely partnership with R. Buckminster Fuller, Jordan’s “Skyrise for Harlem” project offered a Futuristic vision for Harlem that argued for environmental redesign: “it is architecture, conceived of in its fullest meaning as the creation of environment, which may actually determine the pace, pattern, and quality of living experience.”

Jordan was not an architect in the conventional sense, Saval says. “But in the understanding of someone who sought to propose and build interventions in public space, she was.”
Nikil Saval is an editor, writer, and community organizer. He was co-editor of n+1 and a contributing writer for The New Yorker, and is a frequent writer for the New York Times, covering architecture, urbanism, and design. He is the author of Cubed: A Secret History of the Workplace, and he is currently working on a book titled Everything is Architecture, a study of the politics of industrial design. He co-founded Reclaim Philadelphia, a progressive organization, and is the first Asian American to be elected Democratic ward leader in Philadelphia.