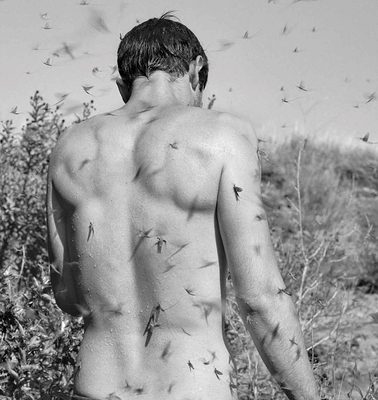 
Coming Soon - Available for Pre-Order Now
- The first book by this award-winning American photographer, presenting a nuanced portrait of rural life in 21st-century America- Her photographs are in the collections of the Yale University Art Gallery, the Center for Creative Photography at the University of Arizona, and the Lowe Art Museum in Miami- An exquisite object, beautifully printed and bound in Italy using 5 kinds of paper, with a 4-color printed slipcase and Swiss bindingIn Bare Handed, photographer Holly Lynton presents a nuanced portrait of rural life in 21st-century America. Returning to specific communities year after year, Lynton moves beyond mythology to reveal a complex social landscape suffused with tradition but unburdened by nostalgia. The 85 gestural portraits and visceral landscapes in her debut monograph depict people working barehanded in tandem with their environments, using tools mostly replaced by mechanization. This decade-long series goes far beyond the yields of a harvest to celebrate an almost spiritual state of being that emerges from time-honored practice and underscores a commitment to unmediated experiences with the natural world. Her keen attention to cultural visual memory is further contextualized in original poetry and essays by art historians Terence Washington and Carl Fuldner. "Lynton's spellbinding color photographs convey an elemental connection to animals, the earth, and ritualized agricultural practices. The imposing, often tense physicality of the men, women, and animals and the dramatic lighting turn barns and compost heaps into stages for conflict, surrender, and transfiguration" - The Boston Globe.
Holly Lynton (American, b. 1972) is an artist living in Western Massachusetts. Lynton received a BA from Yale University in 1994 and an MFA in Photography from Bard College in 2000. Her photographs have been exhibited internationally and are held in several public collections. Lynton has received numerous awards and grants including the 2021 Critical Mass Top 50, an Aaron Siskind Individual Photographer's Fellowship, a Massachusetts Cultural Council Fellowship, and the Syngenta Photography Award. Yale University awarded her a postdoctoral research fellowship in 2019 at the Gilder Lehrman Center for the Study of Slavery, Resistance, and Abolition for her series Under the Brush Arbor, an exploration of Methodist camp meetings in South Carolina. Her work has been featured in publications such as The New Yorker, The New York Times, The Boston Globe, The Guardian, The Miami Herald, Southern Cultures, and Harvard Design Magazine. Recent exhibitions include On the Basis of Art, 150 Years of Women at Yale (2021), at the Yale University Art Gallery, and a solo exhibition in collaboration with Maurice Wallace: Meeting Tonight: Two South Carolina African American Camp Meetings at the Zimmerli Art Museum at Rutgers University (2022). Terence Washington is an independent art historian and curator. Washington has held curatorial, project, and program director positions at the National Gallery of Art in Washington DC, Arizona State University, and NXTHVN in New Haven, CT. Most recently, Washington was a guest curator for the Philip Guston Now exhibition at the Museum Fine Arts Boston. Washington hold an MA Art History, Criticism, and Conservation from Williams College. Carl Fuldner is a curator and art historian based in Evanston, Illinois. He has held curatorial positions and fellowships at the Art Institute of Chicago, the Yale University Art Gallery, the Smithsonian American Art Museum, the Smart Museum of Art, and the Madison Museum of Contemporary Art. Most recently, he curated The Human Environment (2021), which considers photography in light of the global turn in environmentalism during the 1970s. He holds a PhD in art history from the University of Chicago.