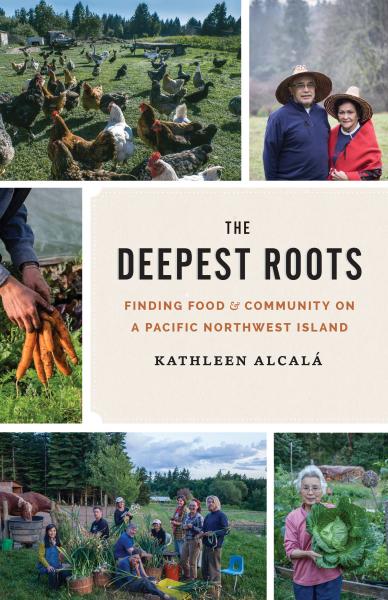 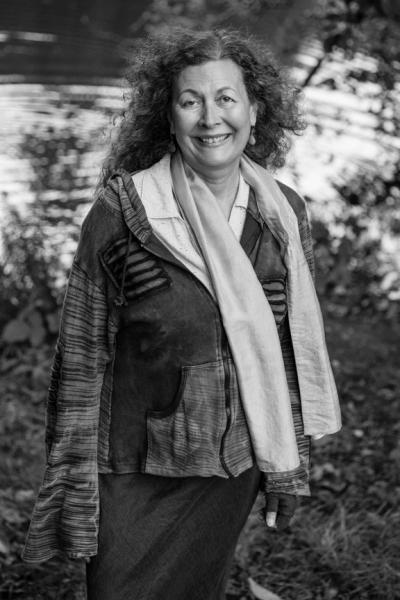 Help us celebrate the newest volume from Island author Kathleen Alcalá, who is launching her exploration of food, history, and community on Bainbridge Island in The Deepest Roots: Finding Food & Community on a Pacific Northwest Island.

This event will take place at the Bainbridge Island Museum of Art auditorium. Listen to an interview with Kathleen on Bainbridge Community Broadcasting! Click here.

As friends began "going back to the land" at the same time that a health issue emerged, Alcalá set out to re-examine her relationship with food at the most local level. Remembering her parents, Mexican immigrants who grew up during the Depression, and the memory of planting, growing, and harvesting fresh food with them as a child, she decided to explore the history of the Pacific Northwest island she calls home.

In The Deepest Roots, which features the photography of Islander Joel Sackett, Alcalá walks, wades, picks, pokes, digs, cooks, and cans, getting to know her neighbors on a much deeper level. Wanting to better understand how we once fed ourselves, and acknowledging that there may be a future in which we could need to do so again, she meets those who experienced the Japanese American internment during World War II, learns the unique histories of the blended Filipino and Native American community, the fishing practices of the descendants of Croatian immigrants, and the Suquamish elder who shares with her the food legacy of the island itself.

Combining memoir, historical records, and a blueprint for sustainability, The Deepest Roots shows us how an island population can mature into responsible food stewards and reminds us that innovation, adaptation, diversity, and common sense will help us make wise decisions about our future. And along the way, we learn how food is intertwined with our present but offers a path to a better understanding of the future.

Kathleen Alcalá is the author of a short story collection, three novels set in 19th Century Mexico and the Southwest, and a collection of essays based on family history. Her work has received the Western States Book Award, the Governor’s Writers Award, and a Pacific Northwest Booksellers Association Book Award. She received her second Artist Trust Fellowship in 2008, and was honored by the national Latino writers group, Con Tinta, at the Associated Writing Programs Conference in 2014. She has been designated a Bainbridge Island Treasure in the Arts.

Kathleen was a faculty member at the Northwest Institute of Literary Arts on Whidbey Island until it recently closed.

The Deepest Roots: Finding Food and Community on a Pacific Northwest Island (Hardcover)