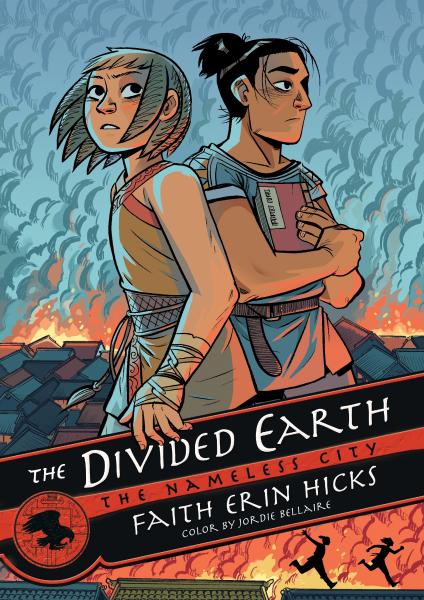 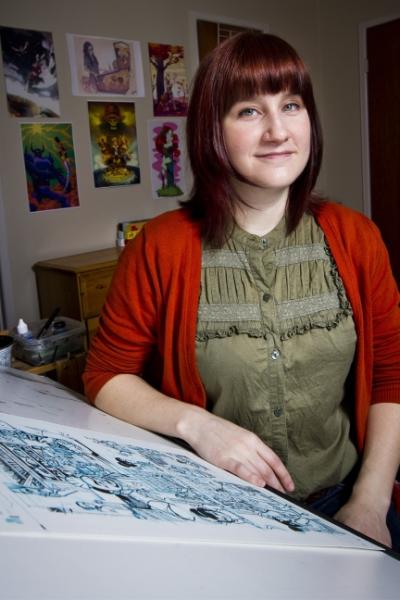 Young fans of graphic novels won't want to miss meeting Canadian author/illustrator Faith Erin Hicks when she visits Eagle Harbor Books on Thursday, Sept. 27, at 5 p.m. She will talk about The Divided Earth, the final book in the Nameless City trilogy. Hicks does both middle reader and young adult graphic novels; this series is geared to kids 9 - 13.

For fans of Avatar: The Last Airbender and Fullmetal Alchemist -- the conclusion to Kai and Rat’s adventure!

Every nation that invades the City gives it a new name. But before long, new invaders arrive and the City changes hands once again. Kaidu is one such outsider. He's a Dao born and bred--a member of the latest occupying nation. Rat is a native of the Nameless City and hates everything Kai stands for. However, their love for their home has brought these unlikely friends together to save it from destruction.

In the third and final installment in the Nameless City trilogy, the rogue Dao prince Erzi has wrested control of the City from his father and is determined to end the war for the Nameless City once and for all. Rat and Kai must infiltrate Erzi's palace and steal back the ancient and deadly formula for napatha, the ancient weapon of mass destruction Erzi has unearthed—before he can use it to destroy everything Rat and Kai hold dear.

In The Divided Earth, Faith Erin Hicks delivers a heart-thumping conclusion to the trilogy. With deft world-building, frantic battle scenes, and a gentle and moving friendship at its heart, the Nameless City has earned its place as one of the great fantasy series of our time.

"The Nameless City makes you feel everything its heroes are experiencing inside and out, from adolescent angst to the scrape of terra cotta tiles under a leaping boot." — Bryan Konietzko, co-creator of Avatar: The Last Airbender

Faith Erin Hicks is a writer and artist in Vancouver, British Columbia. Her graphic novels include Zombies Calling, The War at Ellsmere, Brain Camp (with Susan Kim and Laurence Klavan), Friends with Boys, Nothing Can Possibly Go Wrong (with Prudence Shen), the Bigfoot Boy series (with J. Torres), The Last of Us: American Dreams (with Neil Druckmann), the Eisner Award-winning The Adventures of Superhero Girl, and the Nameless City series.

The Last of Us: American Dreams (Paperback)