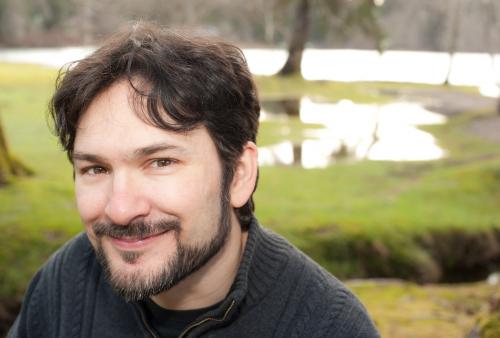 We are delighted to welcome author Randy Henderson to talk about his new book Finn Fancy Necromancy.

Finn Gramaraye was framed for the crime of dark necromancy at the age of fifteen, when the surviving victim of a dark ritual was found in his bedroom.  Convicted and exiled to the Other Realm for 25 years as a disembodied soul, tormented by the Others, Finn is now being set free.  But his return is met by a magical attack on his escorts, and Finn is framed again for dark necromancy.

Finn has only a few days to discover who is so desperate to keep him out of the mortal world, and find enough evidence to prove it to Arcane Enforcers who already view him as a criminal.

Unfortunately, his family is of little help.  Father has become a mad magical inventor.  Brother Mort fears that Finn wants to take over the family business.  Sister Sammy is now a jaded hacker allergic to magic.  And simple but sweet brother Pete still believes he’s a werewolf because of a childhood dog bite, yet wants Finn to help him find a girlfriend.

Finn is joined by Zeke, a former Arcane Enforcer and fellow exile seeking to prove himself worthy of returning to duty — even if that means proving Finn guilty.  Together, they will battle magical creatures, family drama, and the challenges of Finn’s love life as they race to solve the mystery of who wants Finn returned to exile, and why.

“Absolutely marvelous. A funny, quirky, and compelling tale full of fantastic twists and dire conspiracies, featuring a charmingly awkward hero you’ll root for every step of the way. Henderson’s voice is unique and delightful and this is, hands down, the best fantasy debut novel of the year.”—Kat Richardson, bestselling author of the Greywalker series

A Washington native, Randy Henderson is the Golden Pen Grand Prize winner of Writers of the Future for 2014, and his short fiction has appeared in numerous professional publications. Randy was graduated from the Clarion West writing workshop in 2009.