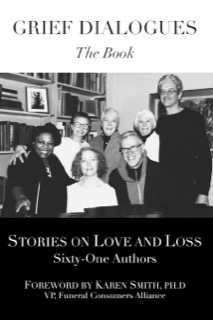 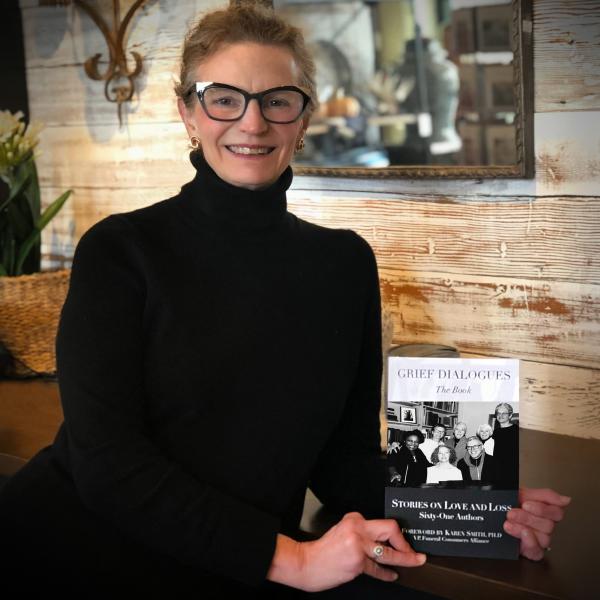 Join local contributing author and MC, Elizabeth Coplan, along with many other local writers, as they read from Grief Dialogues: Stories on Love and Loss on Thursday, March 14th at 7pm. Sharon Stanley will open the topic of writing through grief. Food, wine, and non-alcoholic beverages will add to the event atmosphere.

The book harnesses the power of words to give us an unobstructed view of grief. Personal accounts of love and loss craft a powerful collection of individual stories by over 60 authors and takes readers into the innermost lives of everyday people dealing with dying, death and grief. From Vanessa Poster’s poem We Danced portraying the inevitable interconnection of happy and sad memories, to Ann Lovejoy’s essay When Death Comes where she shares the elegance of her mother’s death with the simple statement “I think she just died but I’m not sure” to Emma Goldman Sherman’s play Super-Death! in which a gravely ill twin brother uses his superpowers in an attempt to make his death okay for his brother. Throw in some practical suggestions from Elizabeth Coplan and the research findings of Dr. Jeanne Broadbent on the impact of traumatic bereavement on therapists’ personal and professional identity and practice and viola Grief Dialogues: The Book is born.

Elizabeth Coplan is a published essayist and a playwright. Her play productions include: Hospice: A Love Story (six week run in LA) and her post-election play Something Wicked (Seattle on inauguration night, and in LA). Her full-length play Hospice debuted in 2017, and Grief Dialogues: The Play opened the Seattle Death Salon in September 2017. In June 2018, the play was performed in the Seattle area to sold out performances. The play, or a portion of the play, appeared in New York, Las Vegas, Portland, Pittsburgh, and Memphis. Grief Dialogues: The Play is part of an artistic movement by the same, using art/theatre to start a new conversation about dying, death, and grief. It invites all of us to reconsider the rhetoric and stigma around death and grief, with the understanding that death is natural and transcends race, creed, ethnicity, gender, age, and economics.