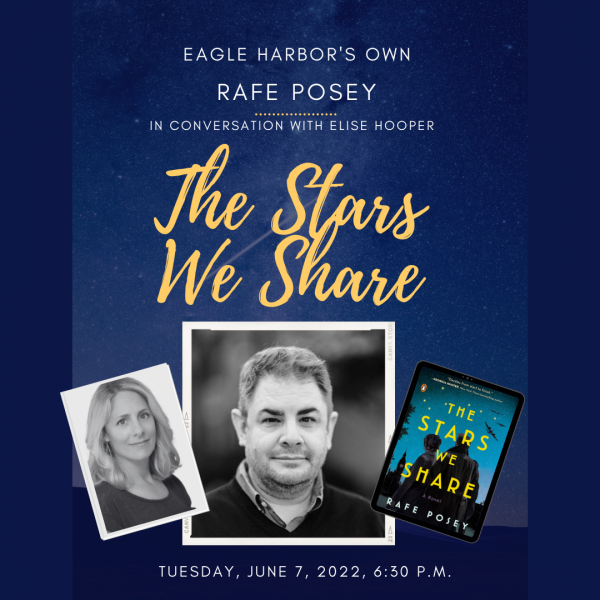 We are delighted to welcome you to an evening with our own Rafe Posey, bookseller and author, as we celebrate the paperback release of his novel The Stars We Share. Rafe will be joined in conversation with Elise Hooper, author of historical novels including Angels of the Pacific and Fast Girls. Please join us for what is sure to be a fascinating conversation!

The Stars We Share is a sweeping novel about the cost of war, the secrets we keep, and the relationship between RAF pilot Alec Oswin and cryptanalyst June Attwell, who are tested again and again by distance, sacrifice, and ambition. ⁣In 1927, orphaned by cholera, eight-year-old Alec Oswin sails from India, leaning on the constellations in the night sky for stability as he wonders what awaits him in England. Meanwhile, in the English fenlands, June Attwell memorizes maps, patterns, and railway timetables, hoping for a future bigger than her father’s vicarage. Alec and June become friends, and, in time, much more. When the Second World War breaks out, Alec joins the RAF, while the Foreign Office sends June to its covert Y-service outposts on the edge of the war-torn Empire. Their post-war reunion is bittersweet: Alec, shot down and imprisoned in a series of POW camps, grapples with his feelings of uselessness. June, on the other hand, has found her calling. And, while Alec carries most of his scars on the outside, June’s are hidden beneath a layer of secrets that will gnaw away at their marriage for decades.

"A well-researched and well-written tale of love and loss in World War II, Posey’s debut novel is captivating historical fiction at its finest. He takes us on an emotional journey as we watch the growth of two characters, in whom we all can find reflections of our own doubts and failures, all while immersing us in a rich array of settings. Simultaneously tragic and hopeful, I recommend this novel to anyone interested in a character-driven story."

Angels of the Pacific: A Novel of World War II (Paperback)

Fast Girls: A Novel of the 1936 Women's Olympic Team (Paperback)

The Other Alcott: A Novel (Paperback)