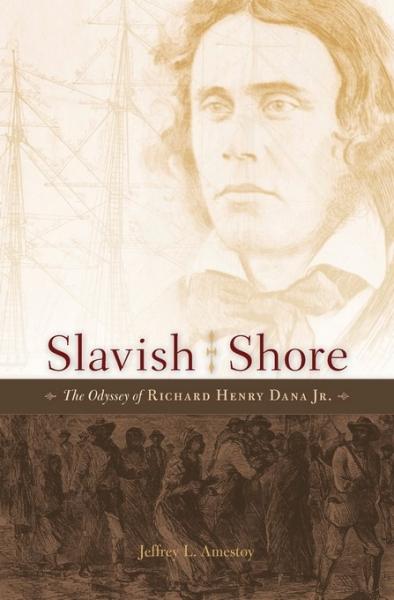 Please join us in welcoming Jeffrey L. Amestoy for a discussion of his richly detailed biography on the life of Richard Henry Dana Jr.

In 1834 Harvard dropout Richard Henry Dana Jr. sailed to California as a common seaman. His account of the voyage, Two Years Before the Mast, quickly became an American classic. But literary acclaim could not erase the young lawyer’s memory of the brutal floggings he had witnessed aboard ship or undermine the vow he had made to combat injustice. In Slavish Shore, Jeffrey Amestoy tells the story of Dana’s unflagging determination to keep that vow in the face of nineteenth-century America’s most exclusive establishment: the Boston society in which he had been born and bred.

The drama of Dana’s life arises from the unresolved tension between the Brahmin he was expected to be on shore and the man he had become at sea. Dana’s sense of justice made him a lawyer who championed sailors and slaves, and his extraordinary advocacy put him at the center of some of the most consequential cases in American history: defending fugitive slave Anthony Burns, justifying President Lincoln’s war powers before the Supreme Court, and prosecuting Confederate president Jefferson Davis for treason. Yet Dana’s own promising political career remained unfulfilled as he struggled to reconcile his rigorous conscience with his restless spirit in public controversy and private life.

The first full-length biography of Dana in more than half a century, Slavish Shore reintroduces readers to one of America’s most zealous defenders of freedom and human dignity.

Jeffrey L. Amestoy has served as Chief Justice of the Vermont Supreme Court and is a Fellow at the Center for Public Leadership, Harvard Kennedy School.