Steph Jagger - Everything Left to Remember 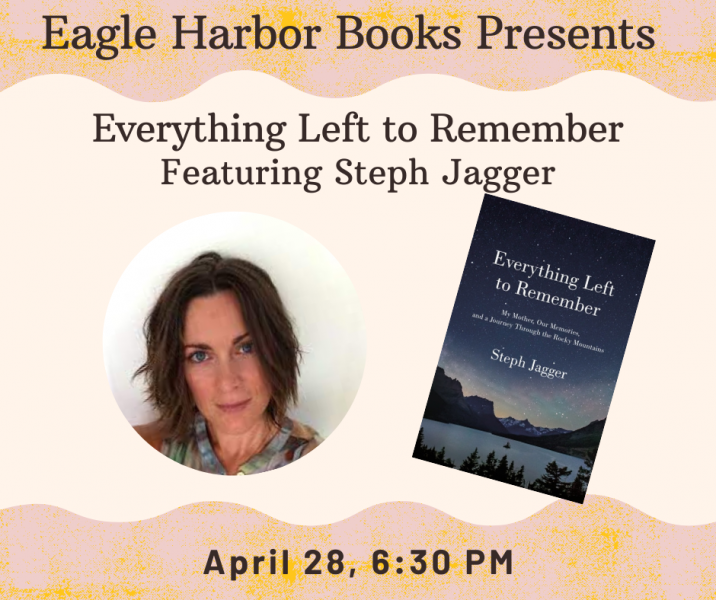 Join us for the book launch of Everything Left to Remember: My Mother, Our Memories and a Journey Through the Rocky Mountains. Bainbridge Island Author presents her extraordinary memoir in which she and her mother, who is suffering from Alzheimer's, embark on a road trip through national parks, revisiting the memories, and the mountains, that made them who they are. It has been described as Between Two Kingdoms meets Wild.

Steph Jagger lost her mother before she lost her. Her mother, stricken with an incurable disease that slowly erases all sense of self, struggles to remember her favorite drink, her favorite song, and—perhaps most heartbreaking of all—Steph herself. Steph watches as the woman who loved and raised her slips away before getting the chance to tell her story, and so Steph makes a promise: her mother will walk it and she will write it.

Too aware of her mother’s waning memory, Steph proposes that the two take a camping trip out to Montana—which her mother, on the urging of Steph’s father, agrees to embark upon. An adventure full of horseback riding, hiking, and “tenting” out West quickly turns into one woman’s reflection on childhood, motherhood, personhood—and what it means to love someone who doesn’t quite remember the person she spent her lifetime becoming.

Steph Jagger is a sought-after mentor and coach whose offerings guide people toward a deeper understanding of themselves and their stories. Her work, including speaking and facilitating, lies at the intersection of loss, the nature of deep remembrance, and the personal journey of re-creation. Steph grew up in Vancouver, Canada and now lives and works on Bainbridge Island, WA. Everything Left to Remember is Steph's second book. Her first, Unbound, was published in 2017. Learn more about Steph Jagger here.

Everything Left to Remember: My Mother, Our Memories, and a Journey Through the Rocky Mountains (Hardcover)