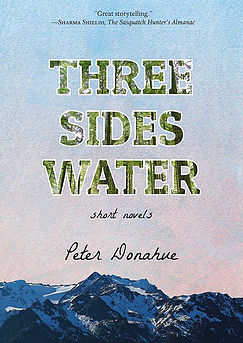 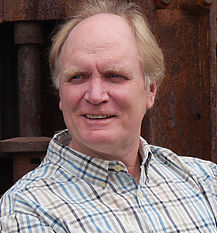 Join us when award-winning Pacific Northwest author Peter Donahue comes to speak about his new volume of short novels, Three Sides Water, all set on the Olympic Peninsula. Peter will be here Sunday, May 20, at 3pm.

In Three Sides Water, Peter delves deep into the lives of three young characters who, learning to act for themselves and make decisions that will shape their lives forever, persevere in an often violent, insensible world. Donahue’s characters are ordinary people defined by history and place who transcend the limitations imposed on them. Across the dramatic landscape of the Pacific Northwest’s Olympic Peninsula, they take extraordinary steps to show what it means to become the agent of one’s own destiny.

“On Rialto Beach” – After surviving a vicious attack, Marguerite Johnson—one half of “The Nartell Twins,” exotic dancers and stage assistants for the leading magician/mentalist of the 1920’s—must decide whether to carry her secret with her or leave it in the wilds of the rugged Pacific coast.

“At Fort Worden” – As the counter-culture movement, racial tensions, and war protests convulse the country in the early 1970’s, Avery Clausen, a “resident” at the Fort Worden Center for Juvenile Delinquency, located in Port Townsend, reckons with the uncertain fate that awaits him and his assorted friends.

“Out of Shelton” – When Chris Langdon leaves the mill town where he grew up to become a crooner in contemporary Seattle (inspired by his idol, Bing Crosby), his relationship with his hometown sweetheart is jeopardized, forcing him to choose between his singing career and returning to work in the family mill.

Peter Donahue is the author of the novels Clara and Merritt and Madison House, winner of the 2005 Langum Prize for American Historical Fiction, and the short story collection The Cornelius Arms. He is co-editor of the 2016 edition of the memoir Seven Years on the Pacific Slope and the anthologies Reading Seattle and Reading PortlandColumbia: The Magazine of Northwest History since 2005. He teaches at Wenatchee Valley College at Omak and lives in Winthrop, Washington.