Hello There, We've Been Waiting For You - signed

When Madison McGee is orphaned and forced to live with her wacky grandmother in boring old Truth or Consequences, New Mexico, she’s pretty sure nothing will ever be right again. Her grandmother is addicted to TV shopping shows. Her only neighbors are a crazy lady and a vicious junkyard mutt. And she misses her old life something fierce. Could it get any worse?

A jeans and T-shirt kind of girl, Madison refuses to be seen in the “cupcake dresses” her grandmother tries to get her to wear. Everything changes when a MegaPix 6000 TV mysteriously shows up on her doorstep. With the accidental push of a button on the remote control, Madison teleports into a dizzying world of lights, cameras, action, and peril. But with the help of a little magic, she discovers that things aren’t always what they appear to be, and that life can actually get better in a brand new way.
-------
Laurie B. Arnold lives on a rocky beach on Bainbridge Island. In addition to “Hello There, We’ve Been Waiting for You!” she’s written and designed over 50 children's interactive computer games featuring original characters such as Putt-Putt and Fatty Bear for Humongous Entertainment and Huggly for Scholastic, as well as classic characters like Madeline, Little Bear, Harry Potter, Clifford the Big Red Dog, SpongeBob, and Mr. Potato Head. She’s also written scripts for animated children’s television shows including DRAGON TALES for PBS. 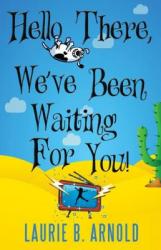