“Let it Go, Louie,” written by Barbara Winther and Gary Loverich, is a history of the Croatian community on Bainbridge Island.

The book’s title comes from an inside joke shared among the island’s Croatian fisherman. During a fishing excursion in the 1920s, Croatian-born Marko “Mr. Mike” Martinolich’s net caught on something in the depths. With the drowning death of his friend Louis Bozanich fresh in his mind, Martinolich hopped over to the side of the boat, peered into the water and yelled “Let it go, Louie!” The line caught on. Generations of Bainbridge fishermen yelled the same request to Louie whenever their nets snagged.

When the fishing season ended, the island’s Croatian fisherman busied themselves on Eagle Harbor’s shores, drying and mending nets and constructing new boats for bigger catches.

“This book isn’t just for Croatians,” Winther said. “It’s for anybody who’s interested in the Northwest’s fishing and boatbuilding history, or what life was like here in the early 1900s.” 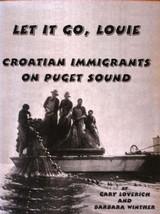