Set in the fictional town of Port Bonita, on Washington State's rugged Pacific coast, "West of Here" is propelled by a story that both re-creates and celebrates the American experience-it is storytelling on the grandest scale. With one segment of the narrative focused on the town's founders circa 1890 and another showing the lives of their descendants in 2006, the novel develops as a kind of conversation between two epochs, one rushing blindly toward the future and the other struggling to undo the damage of the past.

An exposition on the effects of time, on how something said or done in one generation keeps echoing through all the years that follow, and how mistakes keep happening and people keep on trying to be strong and brave and, most important, just and right, "West of Here" harks back to the work of such masters of Americana as Bret Harte, Edna Ferber, and Larry McMurtry, writers whose fiction turned history into myth and myth into a nation's shared experience. It is a bold novel by a writer destined to become a major force in American literature.

"A novel of stunning sweep—part adventure tale, part bittersweet modern comedy. Along the way, West of Here lays bare the surprising web of connections that tie us to our ancestors, the 'trappings of history' that bind us inexorably to the great myths of the past, even as our future fragments and scatters."—Dan Chaon, author of Await Your Reply

" ‘Epic' is yet another one of those words that's been stripped of its meaning from over-use, but no other word can properly describe this novel. I'm in awe. You will be, too."—Ron Currie Jr., author of Everything Matters

“A daring, gorgeously structured, and deeply satisfying expedition of a novel. West of Here deftly connects lives and centuries, pipe dreams and fierce realities, the sensibilities of the modern with the storytelling punch of the classic. Every sentence, character, and hard-won patch of Pacific Northwestern earth shimmers with kinetic truth.”—James P. Othmer, author of The Futurist

"Jonathan Evison writes with a big playful heart. West of Here is a creative bonanza of a novel about the dreamers who settled this lush corner of the country and the people who wake up here today. Its characters and story lines are separated by more than a century yet bound by geography, a dam, and a shared humanity that spills across these pages."—Jim Lynch, author of Border Songs

While I am a strong advocate for any book that I take on as editor, I don’t think I’ve ever been more excited by a novel than I am by Jonathan Evison’s West of Here. It’s not just that Evison is a great writer, able to bring to life both fascinating characters and the times they inhabit. It’s not just that this novel is a great piece of entertainment, and one that, in the end, gives the reader new insight into how we as a nation have been shaped and formed. It’s not just that Evison has managed to create a work of fiction that is both innovative and entirely accessible, melding two stories—more than a century apart—into a seamless whole. It is all these things and more: it is a romance, it is an adventure, it is a sublime reminiscence on the American experience, and, ultimately, like the works of such writers as Bret Harte and Larry McMurtry, I believe it will stand as a lasting piece of literary Americana.

One part of West of Here is set in 1890 and thereabouts, in the mythical town of Port Bonita, on Washington State’s rugged Pacific Coast. In that era we meet an assortment of characters—dreamers, adventurers, explorers, opportunists—who settle this wild land, in the process pushing the Native Americans, for whom it has been home, literally to the edge of the ocean. Running parallel to these storylines are those of the descendents of these settlers, now in the year 2006, forced to deal with the realities of the deeds and misdeeds of their forefathers.

In essence, it’s a story about the footprints of time, how mistakes keep happening, and how people keep on trying to be strong and brave and, most important, just and right. It is about the human spirit, both individual and collective. And it is about the echo of human life, how something said or done in one generation just keeps reverberating through all the years that follow.

To say that I love this book doesn’t begin to express the depth of my respect for its beauty or for the author’s accomplishments. It is a novel that I believe will claim the hearts of many readers, a book that will endure, by a writer who will become a major force in American literature. 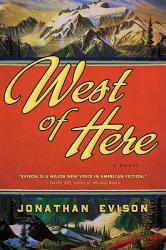