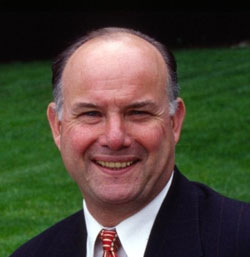 Cold Crossover is Tom Kelly’s first step into fiction and the first of the Ernie Creekmore series. The second book in the series, Hovering Above a Homicide, will be released in Spring, 2013.

Tom served The Seattle Times readers for 20 years, first as a sportswriter and later as real estate reporter, columnist and editor. His weekly features now appear in a variety of newspapers including the Miami Herald, Houston Chronicle, Portland Oregonian, Louisville Courier-Journal, Tacoma News Tribune, and Spokane Spokesman-Review plus hundreds of websites.

His ground-breaking book, How a Second Home Can Be Your Best Investment (McGraw-Hill, written with economist John Tuccillo) showed consumers and professionals how one additional piece of real estate could serve as an investment, recreation and retirement property over time.

Tom’s award-winning radio show “Real Estate Today” has aired for 19 years on KIRO, the CBS affiliate in Seattle. The program also has been syndicated in 40 domestic markets and to 450 stations in 160 foreign countries via Armed Forces Radio.